Dawn left us much too soon on Dec 1st at the age of 52 as a result of a brain tumour.  She had many more races to run. Here are just a few that she did run over the last decade with the last being in September, 2011 just two and 1/2 months ago.    Amazing! 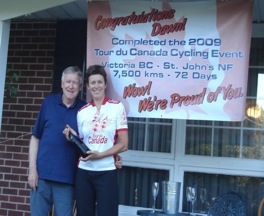 A few of the events Dawn participated in:

Dawn was a athlete who loved to compete and did not hesitate to take on a challenge either on a swim, on a bike or on a run.  She frequently put them all together as noted by the above triathlons that she completed.    She had such a positive and determined spirit. One year at the Saint John Triathlon, she had her old bike and the pedal broke off and she could not complete the event.  She just smiled and took it in stride.  The next year at the same event she had a brand new Yellow Cervelo.  She got a flat, fixed it and finished the race.    So typical, Dawn will be missed by all her friends in the sporting community.   LIVE FOR TODAY.

Donations in her memory can be made on-line or by cheque to the Brain Tumor Foundation of Canada.