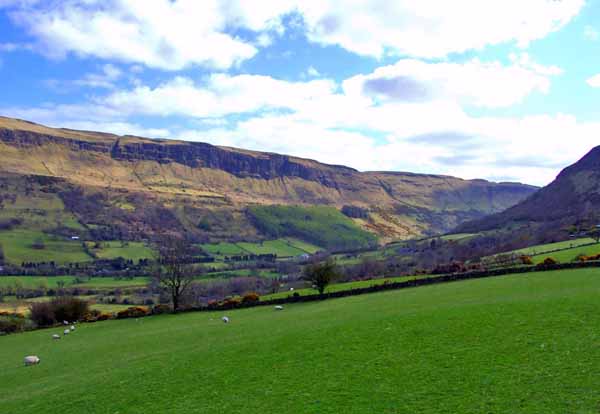 Glenariff - Queen of the Glens of Antrim.

Growing up in Northern Ireland, green fields were to be found in abundance.   There would be sheep on every hill.  It was wonderful to head out into the narrow country roads and hear the birds singing and sheep grazing on the lush grass fed by the rain that falls just about every day.   One of the upsides of all the rain we have received during spring and now with passing thunderstorms that give displays of awesome power that make the July 1st firework display pale in comparison is that the trees are brimming with the abundance of green leaves and the grass is greener than I ever remember it being in July - makes an Irishman hanker for the green, green grass of home.

It was truly a spectacular amazing sight. Something so amazing, astonishing really, it had to be seen to fully appreciated. Phyllis and I were wandering around King’s Landing last Sunday afternoon enjoying the serene atmosphere. Life seemed to slow down, worries left, it became calm, peaceful, untroubled and even tranquil. It was a stepping back in time with the ladies in their long dresses and the gentlemen in their attire - dressed as they were in their Sunday best.

As we walked along, going from the Grant Store on our way to view the magnificent garden at the Ingraham House - which is my favourite place - we heard a loud voice shouting "Jesse! Jesse!" The first thought of course was that someone’s child had wandered off. But no. In response to the voice shouting "Jesse! Jessie!" we heard an almost immediate response of a sheep bleating, not in a weak wavering fashion, but just as excited as any sheep could be as Jesse made her way, with three yearlings following her, and Rammy ( daddy sheep) following up the rear. It was truly a spectacular sight as Jesse recognized the voice of the person who told us that he had raised Jesse by hand using a bottle.

.At once the preacher in me took over. How many home communions over the last 17 years have been celebrated with those who are unable to get to Church I thought to myself. Many now gone to their eternal rest. Every one of those Home Communions used that Gospel from Saint John’s lovely Gospel where Jesus, speaking to a people used to seeing sheep on ever hillside, quietly proclaims "I am the Good Shepherd; I know my sheep and my sheep know me." Earlier in that same Gospel Jesus tells the people how the sheep hear his voice and they follow him. They follow him because they know his voice.

Well Jesse, the mother sheep, would have followed the voice of the man who raised her by hand and bottle absolutely anywhere, and her old man Rammy, and the three young’uns would have followed Jesse anywhere. It was just so amazing to see. As soon as the man spoke Jesse had no eyes or ears for anyone or anything else but the person behind the voice calling her name "Jesse! Jesse!"

As the ‘shepherd’ let Jesse and the flock out, they went straight for the luscious green grass that was just outside their pen and out of their reach. It is interesting that science has caught up with Scripture. Scientists have found measurable evidence that walking among ‘green’ whether it be green meadows, green fields, or green forests, just as long as it is green, the power of the colour green reduces levels of stress in the body, lowers blood pressure and gives to those walking amongst nature’s calming colour a sense of serenity and calmness.

Reminds me of words written 3,500 years ago by a shepherd boy. It goes like this: The Lord is my Shepherd, I shall not be in want. He makes me lie down in green pastures and leads me beside still waters, he restores my soul .....

I think perhaps they knew a thing or two three thousand years ago. We are so fortunate here in Fredericton to enjoy the greenery and river along our trails. Be sure to stop and smell the ‘green’ in freshly cut grass - its good for ‘your’ soul ...

.... even better take a 'walk' through King's Landing and enjoying the serene scenery and the calming silence.