Runner died doing what he loved ... 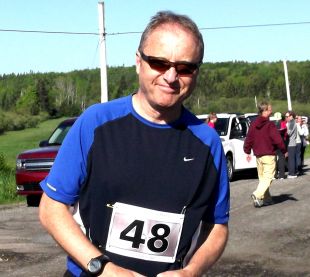 HALIFAX — The man who died Sunday during the Cabot Trail Relay race was an experienced runner who had participated in the event for more than 20 years.

Steve Dunn, 58, of Halifax was doing the last leg of the relay while his 16 teammates from the Salt Marsh Trail Running Club were waiting for him at the finish line.

“He would rather die doing something that he loved and he did love to run,” said Rufus Sweet of Chester, who ran with Dunn in the relay for 17 years. “He lived life to the fullest.”

Dunn was running along Highway 105 near Baddeck when he collapsed. Dunn’s leg of the race covered the last 19.3 kilometres of the two-day 276-kilometre relay.

“Steve was a wonderful and dedicated husband, son, brother, father and friend. His love for life and positive energy was contagious to all who knew him.”

Sweet met Dunn at the relay and said they became good friends over the years as they competed for the Cole Harbour running club.

Chris Milburn, an emergency room doctor in Sydney and a specialist in sports medicine, said a death in a sport like this is “an extremely rare event.”

Milburn, who is also a longtime competitive runner, said it’s the first one he’s heard of in the Maritimes.

Whenever a death occurs in a sport, there is always second-guessing about whether that activity is safe, but the same could be said of anything from sitting on a couch, to shovelling a driveway, to playing hockey.

“Is there a risk? Yes, but it’s exceedingly small,” said Milburn. “The risk of sitting on couch and doing nothing is higher.”

Milburn said runners reduce their risk of heart disease and other health problems, but are not immune to risks.

“Who knows? It may have shortened his life, but odds are it lengthened it even though he died young,” Milburn said

“He was the kind of guy that loved people and he loved to be around them,” Sweet said. “He was a positive individual. He enjoyed other people’s company and he was enjoyable to be around as well.”