In between ice baths, Farah had been scheming with his coach about how to take the step from silver to gold 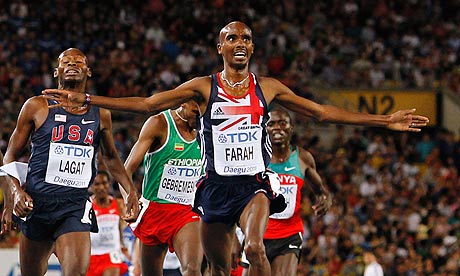 Mo Farah's father never wanted his son to become a runner. "He always wanted me to go to school," Farah said, "to get an education and be a doctor. I'd say: 'I'm going running,' and he would say: 'Why? You need to do your homework'." Farah never listened. It was the first of his many refusals to compromise his natural talent.

In 2008 he finished sixth in the 5,000m at the Beijing Olympics. Then he was seventh in the Berlin world championships two years later. Back then he looked just another British nearly man, a contender who did not quite have what it takes to finish top. And then last year he did the double, 5,000m and 10,000m, at the European championships. For most athletes that would have been proof they were doing something right but for Farah it was not enough.

Six months ago he moved to Eugene, Oregon, to work with Alberto Salazar, and Farah's life has not been the same since. Step by step by step, each following the other as surely as his feet move across the track, Farah has turned himself into the best long‑distance runner on the planet. He got closer than he has ever been before in the 10,000m final here but he was beaten in a sprint finish by a man he had never even heard of, the Ethiopian Ibrahim Jeilan.

That defeat hurt Farah more than he let on. It may have been his first loss this season but he has not developed the shockproof confidence that comes when you make winning a habit. Salazar noticed that Farah was unusually tense on the start line in the 5,000m final and thought that he was still brooding on the defeat in the 10,000m. "It was so hard," Farah said, "because you are always having negative thoughts. I was thinking about the 10k, and this race felt almost similar to the 10k."

However, in between all the ice baths he has been soaking in the last six days, Farah had been scheming with Salazar about how he could take that final step, from second to first.

The coach had three lessons for his pupil. The first was to make sure he ran hard but kept something in reserve for the final 100m. The second was to watch his stride length. When Farah found himself in a race for the line with Jeilan, he wanted to kick on but found he could not. Salazar spotted that it was because Farah was overstriding and it was costing him speed. And the third was plain and simple. It was designed to deal with Farah's main rival, Bernard Lagat. "Whatever you do," Salazar told Farah, "you can never let him past you. If he gets past you, he is going to be empowered by it. Hold him off. If you have to, make him run wide."

The plan Salazar had concocted was for Farah "to lead but not kill himself doing it, do it just enough to tire some of the other guys out". By Farah's standards, however, the bulk of the race was as slow as treacle. He was frustrated and the runners were bunching around him, which meant he was worried about "just staying on my feet".

All the while, the canny old Lagat was on his shoulder, sticking to him like his shadow. "You always follow the guy who is strong," Lagat said. "And Mo is the strongest. He has the best kick, so I was ready for Mo, on his shoulder the whole way. My plan was to get close to Mo Farah and get him in the last 80."

With three laps to go, Farah slipped up to the front. "I thought someone would take it out but the pace wasn't there," he said. "So I had to go myself and wind it up, wind it up to try to take the kick out of them."

When the bell rang for the last lap, he was shoulder to shoulder with the Ethiopian Dejen Gebremeskel, and Farah was trying to keep all those thoughts about what happened in the 10,000m final out of his mind.

Just as he and Salazar had planned, Farah ran each successive 100m stretch of that last lap slightly faster than the one that had come before it. From 14.5sec, down to 14sec, down to 13.5sec, an incremental progression that should burn off anyone attempting to keep up with him but ensure he had enough left for a sprint if it did not. And then he got a little luck. Coming around the last bend, Lagat got boxed in, behind Gebremeskel and his team-mate Abera Kuma. "It was frustrating like hell," Lagat said. "By the time I got out, Mo was gone. He is running 24, 25 [seconds] in the last 200. What am I supposed to do? Run 22?"

Salazar said that as he watched Farah go down the home straight, he could see his athlete was thinking about his stride length: "'Get the foot down, get the foot down.' He is a great student," Salazar said. "Under pressure, he remembered something he has only been thinking about for four days." And Salazar is a great coach. No wonder that the first thing Farah did in his press conference was to thank him.

The coach's plan was good. But the pupil's execution was flawless. "I've always said Mo has heart and courage," Salazar said. "Tonight he has shown that he also has great discipline."

Look at him now, Pa. Top of the world.