How to Push Past the Pain, as the Champions Do

My son, Stefan, was running in a half marathon in Philadelphia last month when he heard someone coming up behind him, breathing hard. 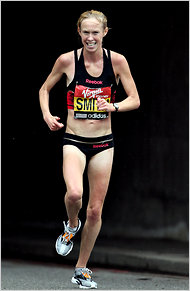 To his surprise, it was an elite runner, Kim Smith, a blond waif from New Zealand. She has broken her country’s records in shorter distances and now she’s running half marathons. She ran the London marathon last spring and will run the New York marathon next month.

That day, Ms. Smith seemed to be struggling. Her breathing was labored and she had saliva all over her face. But somehow she kept up, finishing just behind Stefan and coming in fifth with a time of 1:08:39.

And that is one of the secrets of elite athletes, said Mary Wittenberg, president and chief executive of the New York Road Runners, the group that puts on the ING New York City Marathon. They can keep going at a level of effort that seems impossible to maintain.

“Mental tenacity — and the ability to manage and even thrive on and push through pain — is a key segregator between the mortals and immortals in running,” Ms. Wittenberg said.

You can see it in the saliva-coated faces of the top runners in the New York marathon, Ms. Wittenberg added.

“We have towels at marathon finish to wipe away the spit on the winners’ faces,” she said. “Our creative team sometimes has to airbrush it off race photos that we want to use for ad campaigns.”

Tom Fleming, who coaches Stefan and me, agrees. A two-time winner of the New York marathon and a distance runner who was ranked fourth in the world, he says there’s a reason he was so fast.

But the question is, how do they do it? Can you train yourself to run, cycle, swim or do another sport at the edge of your body’s limits, or is that something that a few are born with, part of what makes them elites?

Sports doctors who have looked into the question say that, at the very least, most people could do a lot better if they knew what it took to do their best.

“Some think elite athletes have an easy time of it,” Dr. Swart said in a telephone interview. Nothing could be further from the truth.

And as athletes improve — getting faster and beating their own records — “it never gets any easier,” Dr. Swart said. “You hurt just as much.”

But, he added, “Knowing how to accept that allows people to improve their performance.”

One trick is to try a course before racing it. In one study, Dr. Swart told trained cyclists to ride as hard as they could over a 40-kilometer course. The more familiar they got with the course, the faster they rode, even though — to their minds — it felt as if they were putting out maximal effort on every attempt.

Then Dr. Swart and his colleagues asked the cyclists to ride the course with all-out effort, but withheld information about how far they’d gone and how far they had to go. Subconsciously, the cyclists held back the most in this attempt, leaving some energy in reserve.

That is why elite runners will examine a course, running it before they race it. That is why Lance Armstrong trained for the grueling Tour de France stage on l’Alpe d’Huez by riding up the mountain over and over again.

“You are learning exactly how to pace yourself,” Dr. Swart said.

Another performance trick during competitions is association, the act of concentrating intensely on the very act of running or cycling, or whatever your sport is, said John S. Raglin, a sports psychologist at Indiana University.

In studies of college runners, he found that less accomplished athletes tended to dissociate, to think of something other than their running to distract themselves.

“Sometimes dissociation allows runners to speed up, because they are not attending to their pain and effort,” he said. “But what often happens is they hit a sort of physiological wall that forces them to slow down, so they end up racing inefficiently in a sort of oscillating pace.” But association, Dr. Raglin says, is difficult, which may be why most don’t do it.

Dr. Swart says he sees that in cycling, too.