From the Wall Street Journal No less! Interesting Article.

For 'Mega Marathoners,' the Race Is On -- to Run More Races 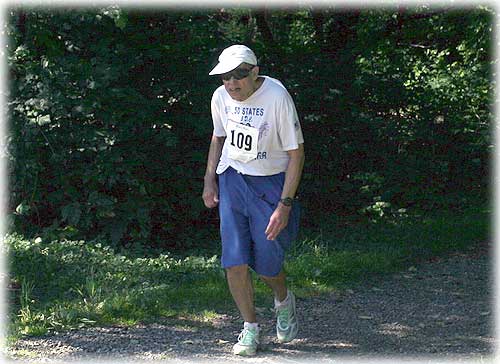 The Connecticut personal-injury lawyer cracked three vertebrae when he slipped during a race last December. He pulled a hamstring in Tampa two months later, and again in Mississippi a week after that. He nearly passed out in the parched hills of South Dakota in August, finishing last by two hours. In October, he got lost in the woods of Indiana when organizers cleared away the markers. "It's an obsession," he says. "No different than gambling, drinking or doing drugs."

Mr. DeFronzo is part of a proud subculture of self-styled "mega marathoners," people who run hundreds of the 26.2-mile races. Three Germans, a Finn and a Japanese woman are known to have clocked more than 1,000 marathons apiece -- that is 26,200 miles, about 1,300 miles more than the circumference of the earth. The record holder, 74-year-old Horst Preisler, has run 1,636 marathons.

Norm Frank, 78, owner of a lawn-care company in Rochester, N.Y., was poised to be the first American to break that one-thousand mark before he suffered a stroke last November, a month after running his 965th marathon. He is now in a nursing home, forced to use a walker as he works to regain his strength and sense of balance. "I still have hopes," Mr. Frank says.

Floridian Denny Fryman, 62, has only 192 to go. Shooting for 20 a year, the hotel concierge figures he can get to 1,000 before he turns 72. "Every time I cross the finish line, it's the biggest natural high there is," he says.

Scientists have studied compulsive running, not only in humans but in rats and mice. Some compare it to eating disorders like anorexia nervosa.

Michael Sachs, a professor at Temple University in Philadelphia who studies exercise addictions and usually runs 18 miles a week, says for most people, running multiple marathons is simply a passion, like skiing or surfing, and not a disorder. He says runners enter addiction territory only when they can't control their urge to race. "If running marathons is at the top of your list of values above all else," says Dr. Sachs, "that might be something to worry about."

Marathon trackers say fixations usually hit in middle age, when men and women want to test their abilities before it's too late. That's also when people tend to have more free time and disposable income. The passion inspires odd fraternities. Have you run 100 marathons? There's a club for that. Have you notched at least one marathon in all 50 states? There's a club for that, too.

Bob Dolphin, who founded the 100 Marathon Club in 2001 with his nonrunner wife, Lenore, says he ran "seven marathons in seven consecutive weekends at age 77 in 2007." Others have been known to do 50 races in 50 weeks the year they turn 50.

More than 435,000 runners crossed the finish line at the country's 361 marathons last year, according to John Elliott, who runs the Marathon Guide Web site, which tracks nearly all U.S. marathons and records. Most of those were content with finishing just one race, but many were repeat runners, estimates Mr. Elliott.

One tally of mega marathoners, compiled by Japan's 100 Marathon Club, counts 167 runners world-wide who have logged at least 300. Thirty-three are American.

Yes, there are the medals, and the bragging rights. Larry Macon, a 64-year-old lawyer at Akin Gump in San Antonio, Texas, says he does it mainly for the fresh air and camaraderie. He ran 105 last year, or more than two a week, and is about to break 600.

Mr. DeFronzo has achieved the 50-states feat six times and is 13 states shy of his seventh circuit. Every lap around the country, he figures, costs him $25,000 in travel costs and registration fees.

He ran past penguins in Antarctica. He had a near miss with lions in Kenya. He did a race in Death Valley, and crossed the tundra in Canada's Nunavut Territory. He has run in Saginaw, Mich., four times.

The walls of Mr. DeFronzo's law office in Cheshire, Conn., are hung with race medals, mounted and framed. A billboard outside bears a 12-foot-square photo of him finishing the 1994 Philadelphia Marathon, and the slogan: "I'll go the extra mile for you."

He can't quite pin down why he does it. "It's hard, and you don't get anything at the end but a medal," he says. "I guess overachievers just like to put obstacles in their way to conquer."

His physician, Dr. Stephen Harris, calls Mr. DeFronzo both "a nut job" and "a marvel." His vitals, Mr. Harris says, are those of a much younger man, while "his muscular and skeletal system is spectacular.".

Even the cracked vertebrae last December and the pulled hamstring only slowed Mr. DeFranzo a bit. His recent trip to North Carolina's Outer Banks marked his 15th marathon of the year. Last year, he ran a total of 35.

He arrived at Kitty Hawk a day early, as usual, to survey the route. He loaded his plate with rigatoni at the traditional pasta dinner the night before, but shunned the sauce because it could upset his stomach. "Too risky," he said. He woke before dawn to stretch in his motel room, swallowed an aspirin and stuffed a spare shoelace in his pocket.

Jostled by runners near the starting line, he chugged a Red Bull, a caffeine-loaded drink whose motto is, "Gives You Wings." He crammed two more cans in his back pocket and carried a fourth in a plastic bag. "My aim is to run this in finish time -- whatever time it takes to finish," he said. "I'm not looking for any hour or minute."

He started strong, stride for stride with the horde, but soon slowed to his own pace. His shirt listed his 50-state accomplishments in bold on the back. A few first-timers jogged past him in awe. "You're an inspiration," one woman said. A guy in a red pick-up stuck his head out the window and yelled, "Way to go, buddy!"

"I don't need crowd support," he said, craning up a slope at the 11th mile. A mile later he chugged his second Red Bull. He navigated much of the course at a pace somewhere between a shuffle and a trot. A second wind, fueled in part by his last two Red Bulls, helped him overtake stragglers in the final miles. He finished 16 seconds shy of seven hours, and 14 runners ahead of last place. The winner beat him by four hours, 27 minutes.

"I'm glad that's over with," he said, before a woman draped him with another finisher's medal. "It wasn't that hard, but still, it's 26 miles."