The man also known as the 'blade runner'  or "the fastest man on no legs".

Erik Weihenmayer the first blind person to climb Mount Everest wrote in an essay that Oscar Pistorius was "on the cusp of a paradigm shift in which disability becomes ability, disadvantage becomes advantage. Yet we mustn't lose sight of what makes an athlete great. It's too easy to credit Pistorius' success to technology. Through birth or circumstance, some are given certain gifts, but it's what one does with those gifts, the hours devoted to training, the desire to be the best, that is at the true heart of a champion." 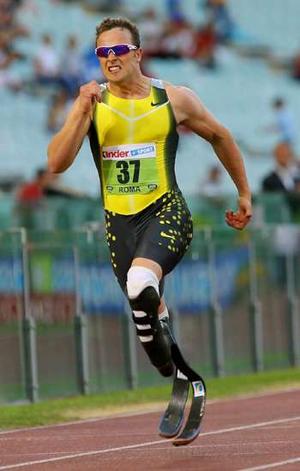 South African double amputee Oscar Pistorius has been selected to run in the 400 meters and 4x400m relay at the world athletics championships starting in Daegu, South Korea, this month.

In a statement Monday Athletics South Africa said Pistorius, who runs on carbon fiber attachments, had been named to compete in both events.

Pistorius, 24, who has been dubbed the Blade Runner, met the qualifying requirements when he clocked 45.07 seconds at a meeting in Lignano, Italy, last month.

"I have dreamed for such a long time of competing in a major championships and this is a very proud moment in my life," Pistorius said in a statement.

"It is an honor to be representing my country at such a prestigious event and I hope to do my best at the competition for South Africa."

Pistorius first competed against able-bodied athletes in 2007 but the International Association of Athletics Federations (IAAF) then amended its rules to ban the use of "any technical device that incorporates springs, wheels or any other element that provides a user with an advantage over another athlete not using such a device."

In the following year the world governing body said scientific research had shown Pistorius enjoyed an advantage over able-bodied athletes and banned him from competitions held under their rules.

However, the decision was over-ruled by the Court of Arbitration for Sport, making Pistorius eligible for the 2008 Beijing Olympics although he was unable to qualify for the South African team, winning gold medals instead in the Paralympic 100, 200 and 400 meters.

The decision to include Pistorius in the relay squad is likely to create further controversy because of the possibility of an odaccidental clash with competitors during the baton changeover, which is often chaotic and leads to clashes and falls.

IAAF spokesman Nick Davies said safety issues were a matter for the organization's technical delegates but added that it would make sense for Pistorius to run the first leg which is staged in lanes.

"It would be sensible to run the first leg because then you would stay in the lane," he said. "But it will be for the technical delegates to decide, they have full power.

"A decision can be made any time before the championships."

(Writing by Jason Humphries in Durban; Editing by John Mehaffey)