To Beat the Heat, Drink a Slushie First 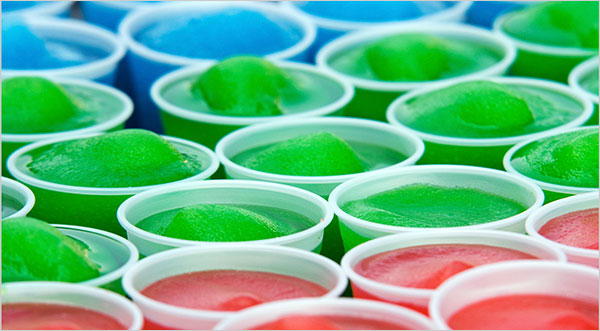 The reasons are also no surprise. Blood is directed to the skin for cooling, which means it is diverted from working muscles. The hotter it is, and the harder the effort, the harder exercise becomes. Eventually, you slow down or stop, unable to go on. Exercise physiologists debate why. It could be that muscles are starved for blood. It could be that the brain gets too hot. It could be that the heart eventually can’t beat fast enough to satisfy all the demands for blood. But even without knowing why, researchers have found they can delay the time to utter exhaustion by getting people a bit chilled before they start.

So companies sell devices, like cooling vests to wear before exercise, or even portable cold baths for prerace immersion. Researchers have tested methods like having athletes swim for an hour in cold water or sit in a cold room or stand in a cold shower. No matter what the method, companies and researchers report a precooling effect.

The problem is that none of the methods are easy, cheap and practical. But now, a New Zealand endurance athlete and exercise researcher says he has found a method that is. All you have to do is drink an ice slurry, also known as a slushie, before exercising. In a new study, he reports that young male recreational athletes who drank a syrup-flavored ice slurry just before running on a treadmill in hot room could keep going for an average of 50 minutes before they had to stop. When they drank only syrup-flavored cold water, they could run for an average of 40 minutes.

There are limitations — the running test was indoors, so there was no cooling effect from breezes on the skin. In those artificial circumstances, precooling might have had more dramatic effects than it would outdoors. And what athletes really want is to go faster in a race, not run until they drop. But the study tested endurance, not performance, which is typical of such research.

Still, exercise specialists say, the effect was pronounced. “It’s a really interesting study, well done and carefully thought out,” said Craig Crandell, an exercise physiologist at the University of Texas Southwestern Medical Center, who studies the effects of exercising in the heat.

The effect was short-lived, according to the senior investigator, Paul Laursen, at the New Zealand Academy of Sport in Auckland and a competitor who has raced in 13 Ironman triathlons (a 2.4-mile swim followed by a 112-mile bike race followed by a marathon-distance 26.2-mile run). It would not even begin to last long enough to run a marathon or do a century (100-mile) bike ride, for example. But it would be perfect for a sport like tennis or for a 5- or 10-kilometer race or for team sports like soccer or football, and it might give endurance athletes in longer events a boost by letting them beat the heat, to a certain extent, for the first 50 minutes or so.

Dr. Laursen said he thought of using ice slurries because they can lower brain temperature in swine more effectively than cold water. The swine studies were testing methods to cool the body before surgery. Dr. Laursen reasoned that slurries might also effectively cool the body before exercise. The advantage, he said, is that they are even colder than ice — 30 degrees Fahrenheit — an effect that occurs when sugary water is swirled with crushed ice.

“It’s a neat idea,” said Scott Montain, an exercise researcher at the United States Army Research Institute of Environmental Medicine in Natick, Mass. “I wouldn’t have guessed slurries would have that much of an effect.”

It’s not so clear why ice slurries or any other method work, though. As Dr. Laursen notes in a review article, “The mechanisms underlying the performance effects associated with precooling are not yet completely understood.” One possibility, which Dr. Laursen said might have explained the ice slurry results, was that slurries lowered body temperature before the young men ran, letting them run for a longer time before their bodies became critically hot.

Dr. Montain is not sure. The men did not get that hot, he said. At exhaustion, the mean body temperature of those who drank the slurry and those who drank cold water was about 101 degrees.

He said the limiting factor might have been the men’s heart rates. In both groups, exhaustion occurred when heart rates reached about 185 beats per minute. Those who drank the slurry hit that heart rate 10 minutes later than those who drank cold water. Dr. Montain says the heart beats faster and faster, trying to get blood to the skin, for cooling, and to the muscles for exercising, until it just can’t keep up.

“The heart can’t send blood everywhere without the blood pressure falling,” Dr. Montain said. “At some point, you can’t maintain your blood pressure.” But, Dr. Montain said, what mattered in the end was that the simple solution of drinking an ice slurry worked. He might even try drinking a one himself if he’s stuck racing in the heat, something he tries to avoid.

“I try to race when the weather is good,” Dr. Montain said. “I live in Massachusetts, so I can choose.”

Dr. Crandall, in Dallas, might seem the ideal person to use a slurry before a run. But he’s less interested.

“I just run for enjoyment,” he said. And if he drank a slurry with its sugary syrup, he said, “all the calories I burned off would be added back.” Dr. Laursen, though, is drinking slurries. He gets ice cream headaches when he drinks them — everyone does, he said — but he puts up with the pain. It’s worth it.

When he has a slurry before a grueling bout of exercise in the heat, he said, “I feel so much better.”