Will Training in the Heat Improve Your Performance in the Cold?

Can training for hot weather help you to perform better when the temperature outside begins to drop? That question, the answer to which intuitively would seem to be a resounding no, became the inspiration for a new study by scientists at the human physiology department at the University of Oregon.

For the study, published last month in The Journal of Applied Physiology, researchers recruited 20 highly trained competitive cyclists from the university’s cycling team and local cycling clubs and put them through a series of laboratory performance tests, including a time trial, under both hot and cool conditions. 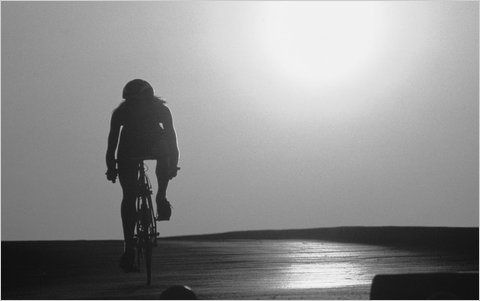 The riders were divided into two groups. One set began heat acclimation. This is a fairly straightforward process. You ride in the heat; your body adjusts. In this case, the riders completed 10 training sessions in a lab heated to 104 degrees. The room was roasting. The cycling itself was easy; the intensity hovering at around 50 percent of each rider’s VO2 max or maximal oxygen consumption, a leisurely pace for a trained athlete. The riders pedaled for 45 minutes, rested for 10 minutes, then rode for another 45 minutes during each session. This acclimation riding was in addition to their usual training mileage.

A second set of riders, meanwhile, acting as a control group, completed the same training but in a cooled laboratory, so that they would not become heat acclimated.

Afterward, each rider repeated the laboratory performance tests from earlier, to see how they now compared. The laboratory in which they rode during the cool sessions was chilled to an autumnal 55 degrees. The results were striking.

The cyclists who were heat acclimated performed anywhere from 4 to 8 percent better than they had before they trained in the heat, while the control group did not improve at all. “That’s a huge difference when you’re talking about competitive performance,” said Santiago Lorenzo, the lead author of the study and now a postdoctoral research fellow at the Institute for Exercise and Environmental Medicine at Texas Health Presbyterian Hospital in Dallas. He also competed in the 2004 Olympics in Athens as a decathlete.

“We were surprised,” he continued, and not just that heat acclimation should have any positive effect on the riders’ performances, “but by the magnitude and consistency of that performance benefit. It was really quite dramatic.”

It’s common knowledge (backed by decades of sound scientific research) that to perform well and safely in hot weather you need to be acclimated to working out when it’s hot. “Humans’ ability to adapt to heat is one of the most robust adaptations that we have,” said Christopher Minson, head of the department of human physiology at the University of Oregon and senior author of the study. As a result of our getting used to the heat, the volume of plasma in the blood increases, sweating begins earlier and is much heavier, and the heart adapts, pumping blood to the skin’s surface faster, thereby releasing heat through convection cooling. All of these adaptations allow the body’s core temperature to remain within a physiologically safe range.

But why would heat adaptations affect exercise performance in cool weather? “That’s a very good question,” Dr. Lorenzo said, for which the researchers don’t as yet have a definitive answer. “It’s likely that even in cool temperatures,” like those in the 55-degree lab,” Dr. Lorenzo said, “athletes become overheated during intense exercise and so heat adaptations have an impact.”

The adaptations, in and of themselves, also may improve performance, Dr. Minson said. “We saw significant cardiovascular adaptations,” he said, which might confer benefits to athletes, no matter what the temperature in which they’re training or racing.

But there are many caveats to the study that should be considered before you head to Death Valley or rush out to turn up the thermostat in your local gym. “We were dealing with highly trained athletes in a very tightly controlled environment” Dr. Lorenzo said. “This was not a real-world-type situation.” Whether the same benefits would accrue during a recreationally paced century bike ride in mid-November is not known.

Similarly, the researchers were examining heat acclimation in cool but not bone-chilling temperatures. “Working out in really cold, wintertime temperatures might be a completely different ballgame,” Dr. Lorenzo said, during which previous acclimation to the heat might have no impact or worse.

Finally, the researchers dealt only with cyclists. “My best guess would be that the findings would apply equally to competitive runners and other endurance athletes,” Dr. Minson said, “but we don’t know that for sure.” He noted that running and cycling are quite different physiologically — which hasn’t stopped some eager marathoners and other athletes from contacting him, asking whether they can improve their fall-season race times by donning plastic garbage bags or ready-made thermal suits “to make them really hot” during training runs. He tells them that he simply doesn’t know enough yet to respond to their questions but hopes to pursue more experiments in this area and have more complete answers eventually.

In the meantime, if you do decide to put these preliminary findings to work in your fall training, Dr. Lorenzo said, be sure to undertake the desired heat adaptations gradually, over multiple slow, easy sessions. Don’t rush or overdo the acclimation process. Overheating can be dangerous (which is why heat acclimation exists, of course). If you begin to feel ill during any of the acclimation sessions, slow down or stop. Consult your doctor. And if you are willing to take the aesthetic sensibilities of your neighbors into consideration, do not wear a trash bag.