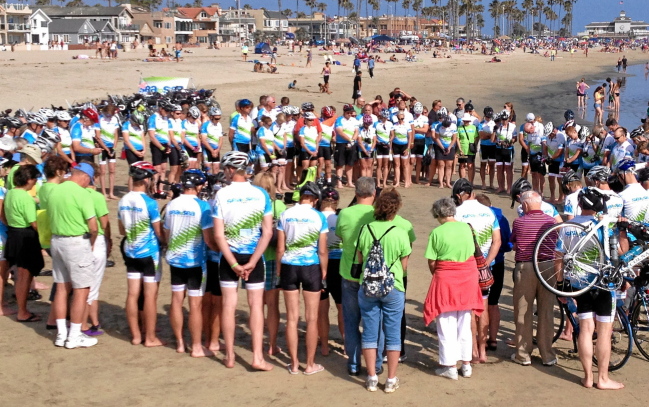 Cyclists take part in a tire-dipping ceremony and prayer at Newport Beach on Sunday to kick off the ttranscontinental Sea to Sea Bike Ride to raise awareness and money for charities fighting poverty.

Cyclists are pedaling across the continent in an attempt to break the cycle of poverty.

The Sea to Sea tour kicked off Monday morning in Newport Beach. The first leg ended nearly 70 miles later in Redlands where riders set up camp on the Arrowhead Christian Academy soccer field on Monday night.

The West Side school was contacted because of its connections in the cycling community, according to high school principal Brian Bell. A national bike trip helped raise funds for the school to start its special education program, which will enter its fourth year of operation this fall.

"It's a great group of people, and we are just glad we can be supporting them as they take on a really important issue," Bell said.

The 3,839 mile tour hopes to raise $2 million dollars after costs for various charities. The three main sponsors -- Reformed Church in America, Partners Worldwide and World Renew -- will inherit 65 percent of the money raised, and the rest will go to other charities, according to Daniel Ohlson, Sea to Sea communications manager.

Groups may apply for grants through the tour's website, seatosea.org. There, individuals can donate money and sponsor riders.

Approximately 210 riders are expected to participate, with 80 or so completing the entire trek from Newport Beach to Staten Island, N.Y., with stops across America and into Northeast Canada.

The riders will be pitching tents at campgrounds, state parks and schools, like ACA.

Two trailers are making the trip as well. One is carrying the riders' gear, and the other is a mobile kitchen that feeds the riders three times per day.

The event is modeled after a 2005 and 2008 bike tour hosted by the Christian Reformed church, which raised $1 million and $1.5 million, respectively, according to Ohlson.

"The real driver is the fight to end poverty, and cycling is hopefully a conduit for making that happen," Ohlson said.

The cyclists are scheduled to depart ACA at 6 a.m. Tuesday morning, ride through downtown Redlands and Yucaipa, and rest 80 miles later in Coachella.