In Summer?s Heat, Watch What You Drink 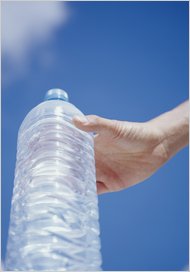 Chances are the summer heat will tempt you to grab whatever cold liquid might be handy, and many of today’s most popular choices are loaded with sweet calories that actually increase the body’s need for water. Chances are, too, that no matter what the season, you probably don’t drink enough fluid to fulfill your body’s requirements.

It’s not wise to rely solely on thirst to guide your water intake. Nor should quenching your thirst be a measure of whether you’ve drunk enough. To calculate how much water you need each day, multiply your weight in pounds by 0.08; the result is your requirement in eight-ounce cups.

Before those who weigh 200 pounds panic about having to drink 16 cups of liquid a day, keep in mind that about half the fluid people need comes from fruits, vegetables and other solid foods.

Barbara J. Rolls, a nutrition researcher at Penn State and the author of “Volumetrics” (HarperCollins, 2000), and her colleagues have demonstrated in many studies that people consume fewer calories when their meals and snacks have a high liquid content. Drinks consumed with and between meals do not have the same satiating effect, their research has shown.

People who drink lots of high-calorie beverages rarely compensate by eating less, and they can end up with a caloric overload. And if people who try to limit calories fill their daily quota with high-calorie drinks, they can easily shortchange themselves on foods that supply essential, health-promoting nutrients: fruits and vegetables (which, incidentally, are an important source of liquids in a well-balanced diet), protein-rich foods and whole grains.

The effects of dehydration can be subtle, with an array of confusing symptoms that can leave people feeling fatigued, irritable and unproductive, often with side orders of headache and muscle cramps.

Athletes, whether amateur, recreational or professional, often fail to drink enough to compensate for the fluid they lose through sweat and respiration, and as a result they may not perform up to par. Even the totally sedentary are at risk when high heat, dry air (air-conditioning in the summer, heating in the winter) or high altitudes increase their bodies’ water needs.

For the elderly, who often restrict their liquid intake for fear of having to get to a bathroom quickly, dehydration is commonplace and can be downright dangerous. It landed my nearly 90-year-old aunt in the hospital and, in fact, is one of the most common causes of hospitalization for people over 65.

Despite their caffeine, which is a mild diuretic, coffee, tea and other caffeinated beverages can count toward your daily liquid intake, though not as completely as the equivalent amount of water. But beware the calories in the souped-up coffees now on many chain restaurant menus, like the 450 calories and 56 grams of sugar in the small (12-ounce) order of a McDonald’s Mocha Frappé or the 330 calories and 33 grams of sugar in a 16-ounce Starbucks Caffè Mocha.

The calorie and sugar content of these and scores of other popular drinks can be found in an enlightening new book, “Drink This, Not That!” (Rodale, Inc., 2010), by David Zinczenko, written with Matt Goulding.

The authors obtained their data on calories and sugar content from information published by companies or required by local laws, as well as from independent laboratory analysis. They noted that popular supermarket products that supply that caffeine buzz include an 8.4-ounce can of Red Bull with 110 calories and 27 grams of sugar and a 20-ounce bottle of Coca-Cola Classic (233 calories and 65 grams of sugar) or Mountain Dew (290 calories and 77 grams of sugar).

Alcohol, however, definitely increases the body’s water need and cannot be included in your liquid intake unless the drinks are prepared with plenty of unsweetened nonalcoholic mixers.

Flavored bottled waters — like Snapple’s Tropical Mango Antioxidant Water — may carry an aura of healthfulness. But the 150 calories of sugar, when consumed in place of plain water, can increase your weight by 15 pounds in a year, Mr. Zinczenko points out. Better to get your antioxidants from fruits and vegetables, which come packaged with valuable nutrients.

Americans now pay a significant portion of their income on a drink they used to get free: bottled waters (nearly 30 gallons per capita a year), including gimmicky waters fortified with vitamins (and sugar) and “relaxing” herbs like chamomile and hibiscus. By sticking with plain, old water from the tap (filtered at home if need be), you can reduce the dependence on oil (plastic water bottles are petroleum-based) and the pressure on landfills and let foods remain your best source of needed nutrients.

Don’t Get Fat on Drinks

The most recent national nutrition survey found that sugar-sweetened sodas are the single largest source of calories in the American diet: 7.1 percent. Yet they supply nothing but water that is of value to the body. And their sugar content actually increases the body’s water needs. The average American now consumes about a gallon of soda a week, and most of it is not the sugar-free diet variety.

When I was growing up in the 1940s and ’50s, soda (8 ounces, not 32) was a drink for special occasions. Seltzer, water, milk and orange juice — not ersatz sugary juices — were the beverages served at meals and snacks.

My brother and I drank a fair amount of chocolate milk, but a shake was a rare treat and far more modest than the 1,160 calories and 168 grams of sugars in McDonald’s 32-ounce Triple Thick Chocolate Shake, as described in Mr. Zinczenko’s book.

I don’t recall any smoothies, certainly not like the 40-ounce Smoothie King Peanut Power Plus Grape with 1,498 calories and 214 grams of sugar, which Mr. Zinczenko noted has the sugar equivalent of 20 Reese’s Peanut Butter Cups.

Even the modestly sized 9.5-ounce Frappuccino supplies 200 calories, 3 grams of fat and 32 grams of sugar.

Think green tea is good for you? The scientific evidence certainly suggests that, with antioxidants and about 40 milligrams of caffeine in each cup, it can boost metabolism, among other health benefits. But those research findings were based on plain green tea, with perhaps a teaspoon (16 calories) of sugar, not on Snapple’s 17.5-ounce Mango Green Tea Metabolism with 140 calories and 33 grams of sugar or Lipton’s 20-ounce Green Tea with Citrus, at 200 calories and 53 grams of sugar.

A version of this article appeared in print on June 29, 2010, on page D7 of the New York edition.