Johnny Kelley - The Heart and Soul of the Boston Marathon 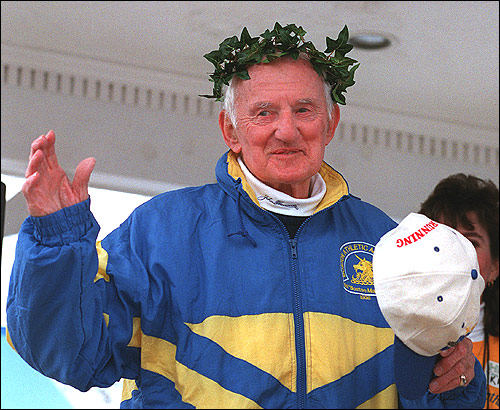 If its April it must be Boston Marathon Month.  Way back in 1981, my first attempt at running the Boston Marathon was to do so as a bandit.   Its a long story and my longest run was much more than 10 miles.    My brother-in-law had qualified but was injured and we were visiting Boston for Easter.   The Boston fell on Easter Monday that year.  He offered me his bib number and I accepted.  How hard could it be anyway?   His best marathon was 2.36 and as I was much younger the expectation on my part was that I'd finish quicker than that.

There was a runner in the field that year .... it was his 50th marathon.    His name was Johnny Kelley.   He finished just munutes behind me.  I ran a 3.42 and change.  They had set up a special finish line for him and his picture was all over the Boston Globe the next morning.  It was the first time hearing about him.   He was part of the Boston mystique.   It was a humbling experience for me to say the least.   There are a great many stories about the Boston.   Here's the story behind that great legend Johnny ( the elder ) Kelley.

Johnny Kelley, a bow-legged marathoner with more endurance than the Energizer Bunny, competed in the Boston Marathon a record 61 times and won the grueling race twice. He finished second a record seven times and in 18 races he placed in the top 10.

''He was the Boston Marathon," four-time winner Bill Rodgers said yesterday of Mr. Kelley, 97, who died Wednesday at a Cape Cod nursing home.

Though his wins were in 1935 and 1945, Mr. Kelley remained a fan favorite for decades and the refrain ''Here comes Johnny Kelley" rang out repeatedly from Hopkinton to the Prudential Center as he jogged gamely in the middle of the pack at the annual event that is as much a celebration of spring as it is an athletic contest.

''The Boston Marathon was his heart and soul," Mr. Kelley's nephew Thomas, of Plymouth, said yesterday.

The eldest of 10 children raised in West Medford, Mr. Kelley originally wanted to be a baseball player, but his father took him to watch the finish of the Boston Marathon when he was 12 years old and he was hooked.

Before retiring from work in 1973, he was an electrical maintenance man for the It was hard, physical work and although often tired at the end of the day, he trained at night.

''A lot of the work was with asbestos," he said in an interview before his 50th Boston Marathon. ''Two of the fellows who worked with me are dead now. I used to wear a mask a lot of the time. The fact that I ran at night after work, in the fresh air, probably saved my life. I owe an awful lot in this world to my running."

He always said that winning his first marathon in 1935 was the sweetest. The race was held on Good Friday, so a relatively sparse crowd of 300,000 spectators lined the streets for the 26.2-mile route.

On a previous attempt he didn't pace himself well and burned out at the halfway point, so this time Mr. Kelley was carrying a good luck charm and a little insurance: a handkerchief from his aunt and 15 chocolate pills he chewed to boost his energy.

He streaked ahead in Wellesley, but nearly stole defeat out of the jaws of victory when he had to stop at Kenmore Square to vomit up the chocolate pills. He was able to continue the race and won by a 2-minute margin.

Often called the ''King of the Marathoners," Mr. Kelley held every New England title from 3 miles to his favorite distance, 15 miles.

In 1936 he ran in the Olympic Marathon in Berlin and was the only American to finish, coming in 18th. He was on the 1940 team, but World War II stopped the games scheduled for Helsinki.

He also ran at the age of 42 in the London Olympics of 1948 and finished 21st. In addition, he had won seven national Amateur Athletic Union championships at various distances from 15 kilometers (9miles) to the full marathon route of 26 miles and 385 yards.

He also competed in France, Ireland, Sweden, Norway, and Canada and, according to his calculations, had run the equivalent of three times around the world. In 1982 he ran in a 30-kilometer race (18.6 miles) in Japan and finished in 2 hours, 35 minutes.

''People always ask me why I keep on running," he said several years ago. ''I keep running because I love it. To me, there's nothing else like it in the world."

Mr. Kelley was named ''Runner of the Century" by Runner's World magazine in 2000.

''He was a champion of amateur athletics," his nephew said yesterday. ''He was never paid. His only prizes were the trophies and medallions he won."

Mr. Kelley was once presented with a ''diamond" tie clip for a race he won on the North Shore, only to find out it was made of glass when he had it appraised.

He continued running in the Boston Marathon until 1992, when he retired at the age of 84. The next year, marathon officials dedicated a statue in his honor, ''Young at Heart," depicting him at 27, when he won his first marathon, shaking hands with his octogenarian self.

For the last several years he rode the route in a race official's car.

''He was an advocate of good health, ready to preach what he called the Kelley Gospel of clean living and exercise to school kids and senior citizens," Guy Morse, executive director of the Boston Athletic Association, said yesterday. ''And every time he spoke, whether to an audience of six or 20,000, he ended by singing 'Young at Heart.' "

Mr. Kelley called all runners his ''flock," and for the past several years delivered his rendition of ''Young at Heart" to them at the Boston Marathon starting line.

''He was an inspiration to anyone who ever laced on running shoes," said Rodgers. ''He always had a twinkle in his eyes and there was this Peter Pan quality to him. ''

He also had a secret. The marathon's elder statesman who reveled in the applause and the respect of his fellow runners still only had one thing in mind: ''He said he never ran a race that he didn't want to win," said his nephew.