A CELEBRATION OF RUNNING 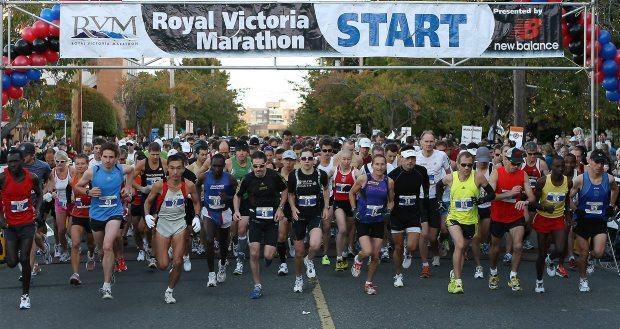 Truly a wonderful evening. It was just simply wonderful to take a trip down memory lane. The CCRR’s edition of Run NB Awards Ceremony and Celebration of Running and Kitchen Party was a huge success.

To talk again with Billy Best and Roly McSorley and Joe McGuire of days gone by when we were all doing sub 40 10K’s and sub 3 hour marathons, it sure brought back memories of showing up at races all across the province and sometimes running two races back to back. As they say back home, ‘tis good to be young - but sure you’re only young once so make the best of it. Bill Best and I ran the Minto Mud Dumps together then Bill had knee surgery which brought his running days to a close. He was a Masters runner - anyone over 40 was considered a Masters Runner. He was at least 10 years older than me but I never did catch him over 10km - came close but never got by him. For one winter I had the privilege of doing ‘speedwork’ in the halls of the Fredericton High School with Roly and Mike and a whole host of other runners before being forced to ‘rest’ an old injury.

A few months ago, while cleaning out my study, there was a box of ‘stuff’ that hadn’t seen the light of day since we moved from Minto to Marysville ten years ago. In this box was my long forgotten Boston Marathon ‘memorabilia’ and I came across the Racing Booklet for the year 1985. There was also my Boston Marathon T-Shirt which is older than a lot of you club members!!

In 1985 the Fredericton Marathon now run these days in balmy May used to be held on a Sunday in April, in the booklet April 14, 1985 is listed. The chance of snow was pretty high. Known as the Fredericton N.B. Heart Marathon the runners headed out on a hilly course along the old Trans Canada Highway, dodging traffic, heading towards Mactaquac and included the big hill. It was a much tougher course than the wimpy flat course run on the trails presently. You had to be a real runner back then to tackle the marathon.

There were road races in Dieppe, The Friendship Carnival Fridgid Five Mile Fun Run; an 8.4km road race in Memramcook, ( strange distance but probably a good reason for it); the Restigouche Half Marathon, the Oromocto 10km; the second annual Tantramar 10km with a ‘scenic run over the marshes- some hills - and was part of the Marshview Frolics - Sackville’s summer Festival.

In June of 1985 there was the ‘new’ Fredericton 10 mile classic organized by the one and only George Hubbard - a well known name within the running community. Campbellton had a 9km road race, the course record held by Joe McGuire (1982) in a time of 28.59.49 and the female course record held Jacqueline Mailet (1983) - again a name most familiar within the running community.

There were a great many other ‘go to’ races - like the George Gallant 10km down in Shediac - held in July and talk about working up a sweat. It was usually hot and humid. Great race and great hospitality as it coincided with their lobster festival!! The contestants for Miss New Brunswick were handing out the water at the water stops. Then there was the Woodstock 10km later renamed in honour of their favourite son to become the Joe McGuire 10k Road Race held in August every year as part of Old Home Week.

And so from St. Isadore to Dalhousie; to Riverview to the Nackawic 9km (what’s with all these weird distances??) to St. Martins 5 & 10 miler. Now there was a race. The St. Martin’s 10 miler was as the brochure describes it ‘considered hilly’. The way I remember it you needed a rope to climb the bloody thing. It also had at least a mile of cross country trails - cows and all! The cost to enter this ‘considered hilly’ event - the understatement of the year - was $3.00. Other races of note in 1985 were the Atlantic Autumn Marathon CFB Gagetown held in September, the Capital City Roadrunners 10km also held in September and we started at the Exhibition Grounds and 4pm - always on a Saturday - as back then Labatts who sponsored the Road Racing Scene that year always had lots of ‘free’ beer to give away and we needed Sunday to sober up. The good old days. (I wasn’t always the running ‘rev’)

The Atlantic Autumn Marathon that started at Base Gagetown was a fast flat course where runners came from far and wide to ‘qualify’ for the famous Boston Marathon. This is back in the days when qualifying for Boston meant something. The 18-34 age category called for a sub 2.50 to get in - today the 3.10 mark is much easier to attain. Boston went for the money and so raised the qualifying times to let more runners in. Lost something along the way - maybe the race’s integrity. But I digress.

In the 1983 edition of the Atlantic Autumn Marathon - it would become known as the ‘short course’ saw the runners, Roly McSorley, Mike Simons, Bill LeDrew, James Tucker and myself making up the Fredericton contingent - ( there may have been others, but I wasn’t a member of the club until 1984 - so can’t really say). However, as we ran along, Roly McSorley became aware that something was wrong. We were hitting the mile splits 15 seconds ahead of our pace. I had forgot, until Saturday night while talking with Roly how ingrained the 6:25 per mile pace was in my mind after running on average 70+ miles a week. There were a couple of weeks where it was closer to 100 mile weeks. Great to be young. James Tucker (he has run at least 20 Bostons ) and I were running together and we were hitting the mile mark ever 6 mins and 10 seconds and there was no way we could sustain that - we wanted to run an even 6.25 pace which would bring us easily under the 2.50 qualifying mark. It was Roly McSorley, who had run the marathon the previous year, who realized at the 10 mile mark what had happened. The course was measured in kilometres as well as miles. The person who measured the course measured 1500 meters to a mile! Word soon got back to the organizers and there was a panic to correct the course at the other end. That’s where things went from bad to worse. The course was a 100 meters short every mile, and so the organizers needed to add 2600 meters to make up the difference, but in doing so they cut another piece out. A real mess.

As the guy who finished just ahead of me threw his lollipop stick to the guy recording place and times (there was no chips in those days ) he shouted at the poor guy -”It’s a good &*^((^@$ job you weren’t dropping bombs” - remember this was a Base Gagetown event. Most of the runners were using the Atlantic Autumn Marathon to qualify for Boston. There was a large contingent of unhappy runners. The Base almost had a war on its hands. James Tucker and I held our 6.25 pace throughout - or what translated into a 6.25 pace - its confusing - had to be there - and all the runner’s times were six minutes faster than expected. I ran a 2.44.

We all got our certificates that guaranteed our entry into Boston - but they didn’t mean much - mine never hung on any wall. The Atlantic Autumn Marathon was known among runners as the ‘short course’ even though those of us who qualified for Boston knew we would have easily run under the 2.50 qualifying time needed. It was my best marathon. The running of a marathon was never so easy. Every mile just like clockwork - the course was at least a mile short or a kilometre depending on who you talked to. It was a good job they weren’t dropping bombs - although the Atlantic Autumn Marathon pretty well dropped a bombshell on its own event - for as a ‘go to’ event it died that day. It would take two more years to give it a proper burial. I ran it again in 1984 - ran a sub three hour - 2.59 and change, but had a hamstring injury from mile 16 on. It was an injury that put an end to my competitive running but that’s another story. The last Atlantic Autumn Marathon was held in 1985 but attracted very few runners. It was finally laid to rest.

Roly told me something I hadn’t heard before about the ‘short course’ marathon. I can’t remember how many of us went to Boston that year, at least 10 or 12. There was a great photo in the Daily Gleaner of us all heading off to the Marathon of Marathons, the Holy Grail of running. We took a lot of flak from other runners who knew about the ‘short course’ fiasco. However, in our minds we had qualified. As Roly said on Saturday night, “…. its not the race that counts, it’s the work you put into that race that counts“. We had done the work. I did mile and half mile and quarter mile repeats - a work out of 10 miles counting warm up and cool down - with six of them at 6 minute mile pace and long runs done at race pace - out and back twenty milers done at a 6.25 pace - and all by myself. I put in a lot of miles on the road. If I even talk about running a marathon my wife threatens to leave me. I was focused that year on qualifying for Boston. Nothing else mattered. Sometimes you need to train alone to get the results you want. That’s what made the Atlantic Autumn Marathon so disappointing for those of us intending to qualify for Boston. So much time, energy and effort for a piece of paper that we couldn’t really brag about.

However, for Roly and Mike Simmons their marathon times - because of the ‘short course’ were under 2.30 and that got them right up to the start line with the likes of Bill Roger and all the other ‘top’ marathons. So there is a silver lining in every cloud. By the way Roly and Mike were doing mile repeats in preparation for the marathon - they would do 11 of them in a row at a 5.35 per mile pace. That’s miles not kilometres.

Saturday night was indeed a great night for me. To talk with Roly, Bill and Joe and take a wee trip down memory lane was indeed good for the old soul. Its hard to believe its been almost 30 years since I set foot (pun intended) on the Fredericton running scene. Lots of good memories came flooding back …. Thanks for the memories - especially to the CCRR team who organized this wonderful evening of food, story, song and music. Truly a wonderful evening.  Thanks to Gabriela for sowing the seed, watering it and bringing it to fruition.