AFTER the New York City Marathon and so much focus on running, walking workouts might seem passé, but racewalking can test even the most avid marathoner.

Racewalkers often attract curious stares because of their exaggerated movements, especially in the arms, which swing vigorously at a right angle and emphasize pulling back the elbows to increase speed. Unlike power walking, which primarily engages the quads, in racewalking the hips control the lower body movement, and the supporting leg must straighten on contact with the ground. Also, one foot must be on the ground at all times or else the aspiring racewalker is actually running. 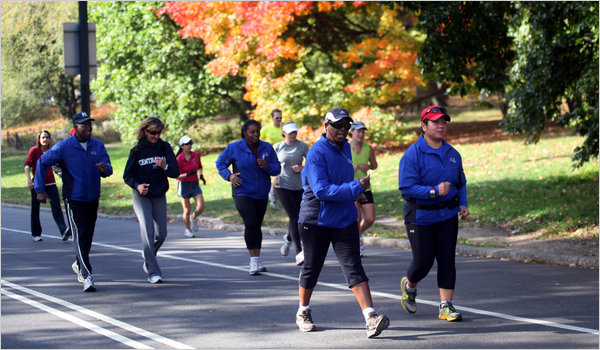 “It’s not like regular walking, and it’s not like you can just walk out your door and do it,” said Stella Cashman, who in 1989 founded Park Racewalkers U.S.A., which runs four group workouts a week in Central Park. “It must be learned.”

That’s why newcomers must go to a separate hourlong clinic to learn the technique before joining the workout. Those who do take a liking to the sport will be rewarded by an intense workout that’s low impact. Skeptics who doubt its effectiveness should take note: Racewalkers at the Olympic level walk a mile in 6 minutes, compared with 15 to 16 minutes for the average Manhattanite.

Andres Fernandes, a graphic designer in his 50s who lives on the West Side, is a regular at Ms. Cashman’s classes. His knees couldn’t tolerate the pounding of running. “I used to have persistent pain, so I took up racewalking, which is easier on my body but as challenging as doing a hard run,” he said.

Participants in his classes warm up and cool down together but walk three to five miles at their own pace. And, independently of the club, Mr. Wilson runs an additional six classes a week in parks around the city.

Lisa Belluci, 31, a lawyer and member of New York Walkers, said that racewalking 25 to 35 miles a week had helped her maintain a Size 4 despite working long deskbound hours. “I used to think about trying running,” she said, “but since this keeps me fit, I’m not tempted by it anymore.” Besides, she can walk a mile faster than many people can run one: her record is just under 7 minutes 30 seconds.

Both organizations hold races of varying distances throughout the year indoors at locations like the Armory Track and Field Center and outdoors at Icahn Stadium in Randalls Island. The ultimate racewalking event is the Coney Island Racewalks, which is either 5 or 10 miles and will celebrate its 100th year on Nov. 21.

But even the New York City Marathon has racewalkers. Mr. Fernandes walked his fifth one this year and was hoping to beat his best time, 5 hours 7 minutes. Unfortunately a bad blister at Mile 21 set him back, and his final time was 5:43. Not a record, but then again, not bad for walking either.