Can America 'Bring Back the Mile'? 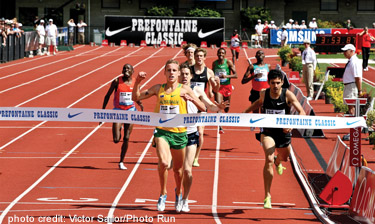 A grassroots movement to return the mile to glory is picking up speed in the U.S.

It used to be that a good mile race was one of the biggest attractions in sports. Decades ago, when track and field was one of the most popular sports in the country, top American milers were heralded with the same reverence as top athletes in baseball, football and basketball.

The mile is still an exciting race, but the distance has lost its luster. Part of the reason is that most high schools run the metric quasi-equivalent 1600m, while college runners might dabble with the mile during the indoor season, but then primarily run the international standard 1500m outdoors. Few open international mile races remain on the pro circuit.

A grassroots movement called Bring Back the Mile launched last winter to return the mile to prominence. Doing so, the founders believe, will inspire more interest in American distance running, revive dedication to fitness among school-age kids and perhaps renew emphasis on community mile races.

" The mile is one of the few distances in track, along with the 100m and the marathon, that most Americans understand," says Bring Back the Mile founder Ryan Lamppa. " But I think the mile is even more embedded in our culture because we use miles in our street signs and on our odometers, and we speak, think and talk in miles. It's America's distance. Let's bring it back."

Although the U.S. gave up on the metric system after a failed attempt to nationalize it in the 1970s, high school and college track and field aligned with sport internationally--440-yard tracks were repainted or rebuilt into 400m ovals and every event changed to metric distances.

While a few states opted to sanction the 1500m, in most states, the standard 4-lap high school race became the 1600m, a distance that's roughly 9.3 meters short of a mile. As of this spring, only Massachusetts offers a mile at its high school state championship meets.

" The 1600m is a misfit distance because after high school, it doesn't exist," says Lamppa, 52, who's the co-founder of the nonprofit Running USA news service. " Nobody outside of high school asks you about your 1600m time and the general public doesn't know what 1600 means anyway."

At the college level, the mile remained indoors, but a movement to return to the mile at NCAA outdoor championships (led by Texas A&M coach Pat Henry) was rebuffed last winter at the national coaches convention. That's partially because the IAAF doesn't accept mile times or converted mile times as qualifying marks for the junior or senior world championships or the Olympics.

The new nonprofit has quickly gained exposure, support and momentum, with former and current athletes Steve Scott, Jim Ryun, Shannon Rowbury and Leo Manzano among the many expressing their support.

" If you're a distance runner--no matter if you're a steeplechaser or a 10K guy--everybody wants to know what your mile time is," says former University of Texas runner Jake Morse, who ran a 4:00.4 mile in college. " At some level, it's all about the mile."

Morse is the race director for the Manzano Mile, a community event in Austin, Texas, founded in 2011 on one of the principles of Bring Back the Mile--that the mile is a distance anyone can run and relate to. The mid-March event hosts several mile races (and mile relays) and draws hundreds of runners of all ages and abilities.

" The mile is great because it's an exciting event to watch, but also because it's so accessible to everyone," says Manzano, a 2008 Olympian at 1500m who won an international mile race at last summer's London Grand Prix meet. " By focusing on the mile, we think we can help generate new interest in track and in running in general."
The primary goal of Bring Back the Mile is to increase the exposure of mile races and encourage states to drop the 1500 or 1600 in favor of the mile. The group's website (bringbackthemile.com) has a petition form that automatically sends individual pleas to appropriate high school activities associations around the country.

Lamppa knows there are bureaucratic hurdles at individual state's high school associations. And changing the 1600m to the mile is lower on the list than other issues, like changing school classification sizes, adding other events like steeplechase, or allowing participation in non-state-sanctioned national events during the school year.

Plus, plenty of states seem content with the 1500m. At Oregon's large-school state meet, which usually attracts 16,000 fans to Hay-ward Field in Eugene, the 1500m is one of the marquee events, says Brad Garrett, assistant executive director of the Oregon School Activities Association.

" Our coaches talk about a lot of things every year and how to change things for the better, but, up until now, we have never heard anyone suggest going away from the 1500m and back to the mile in my 12 years in the office," Garrett says. " Bringing back the mile is a good idea for a lot of reasons, and all the power to them if they can get a movement going."

A secondary aspect of the campaign is to promote running fitness for school-age children. The group has partnered with Rod Dixon's KIDSMAR-ATHON program, an eight-week fitness education program that enables kids to complete a marathon by running a mile at a time. In addition, Lamppa envisions a national series of domestic mile races that might include high-profile pro races on the track and more low-key community road races.

No one has necessarily come out against the new movement, but there have been some skeptics.

" I find it little more than rearranging deck chairs on the Titanic," says Jesse Squire, a runner, coach and track announcer who writes a blog called Track and Field Superfan. " The specific distance we race isn't all that important. What's important is that we emphasize racing, the thrill of the stretch run.

" Consider the Kentucky Derby. Without looking it up, can you identify its distance? Do you have any idea what the record time is? Few who are not horse racing fans could come up with these. But we've all watched the race, because it's the race that matters, not the distance or the time."

American Miles
A rundown of some of the top mile races in the U.S. in 2012
GRAND BLUE MILE
April 24 // Des Moines, IA
This Tuesday evening road race during the week of Drake Relays has fields for recreational to elite athletes.

USA 1 MILE ROAD CHAMPIONSHIPS
May 17 // Minneapolis, MN
Now in its fourth year, this Thursday night race has a $20,000 prize purse.

THE BOWERMAN MILE
June 2 // Eugene, OR
The winner of this Hayward Field race at the Prefontaine Classic is almost always under 3:51.