With temperatures warming and the snows of 2011 finally dissolving into oatmeal slush, many people are feeling an insistent urge to get outside and run, perhaps even to start training for a spring marathon or other distance race. But for some of us, particularly those with young families, this laudatory goal can pose a problem. Should we take our kids with us? Can and should children, at any age, be runners? 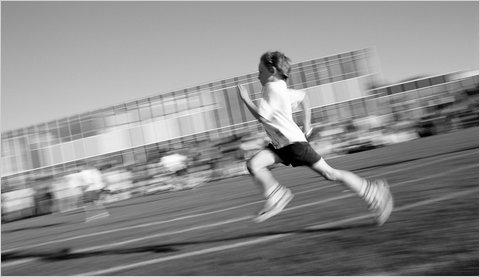 This question, though commonly voiced by athletic parents (I hear it all the time), has received surprisingly little scientific scrutiny. Injury patterns and other issues in youth football, basketball, baseball, hockey and soccer have been extensively studied, but not in youth running. Two new studies, however, have looked squarely at what happens when young people run. Unfortunately they seem to have produced, on first reading, incompatible results.

The most wide-ranging of the new studies, published this month in Clinical Pediatrics, examined data about young runners’ emergency room visits nationwide between 1994 and 2007. The authors, affiliated with the Center for Injury Research and Policy at Nationwide Children’s Hospital in Columbus, Ohio, gathered statistics about children and adolescents who were hurt while running for exercise. The authors excluded injuries that occurred during team sports like soccer or football, even if the youngster was sprinting up the field at the time. He or she had to be specifically running, perhaps during track or cross-country practice, a gym class, a running club or as part of a personal program to get fit.

The number of such purposeful young runners is difficult to gauge. Youth running is not an organized sport before middle school, unlike Pop Warner football or Little League baseball. But according to loose estimates, as many as 12 million youngsters between the ages of 6 to 17 ran for exercise in 2007. Nationwide, participation has grown enormously as school administrators and others have noted that running, among its other attributes, is cheap. Phys-ed teachers need little training or equipment to send students out for a run.

But as participation has grown, so has the incidence of injuries. According to the Nationwide Children’s Hospital report, more than 225,340 young runners visited an emergency room during the 14-year study period, with the number of injuries rising almost every year. Overall, the number of injuries was 34 percent higher in 2007 than in 1994. Meanwhile, the types of injuries sustained by the young runners varied markedly, depending on their ages. Teenagers typically twisted ankles. But children younger than 12 scraped their wrists, elbows and even scalps because, more often than not, they tripped themselves. Close to half of the running-related injuries and most of the head trauma among elementary-school runners was because of falls.

None of which necessarily means that if you’re heading off to run, your child should remain quietly at home (perhaps donning a bike helmet if he or she is under 12), at least according to the implications of another recent study of young runners, this one published last summer and examining whether children as young as seven can safely complete a marathon.

For that study, Dr. William Roberts, a professor of family medicine and community health at the University of Minnesota and medical director for the annual Twin Cities Marathon, and his colleague pulled data about every young finisher of the Twin Cities Marathon from 1982 through 2007. During those years, 310 youngsters age 7 to 17 completed the 26.2 miles, most with quite respectable times. The slowest, an 11-year-old girl, crossed the line in 6 hours 10 minutes, while the swiftest, a 17-year-old-boy, clocked an impressive finish of 2 hours 53 minutes. More important, only 4 of the 310 young people throughout the entire 26 years visited the race’s medical tent, and none required interventions beyond a brief rest. The young runners’ “medical encounter rate,” the study concluded, “was half that of the adults” who finished the marathon during those years.

In other words, it’s safe for 11-year-olds to run a marathon but not to participate in the running program in phys ed class? How are parents supposed to interpret what could be seen as contradictory findings?

“When more kids participate in a sport, you’ll see more injuries,” Dr. Roberts said. “I think that’s happening” with youth running, especially among younger children. But the increased incidence of injuries doesn’t mean, he continued, that running, even over long distances, is inherently unsafe for young people. It does mean that parents, teachers and coaches need to view the sport with appropriate caution. “What we found in our study,” he said, is that “with proper training and planning, the marathon distance can be safe for certain highly motivated children. That does not mean that I would encourage most children” to run a marathon. “We don’t know,” he continued, if there might be long-term, undesirable consequences. The possibility seems remote. No studies have linked distance running by young children to potentially serious overuse injuries like growth-plate disruptions or knee arthritis, Dr. Roberts said, although a few studies have found high rates of stress fractures among high-school cross-country and track runners. (The Children’s Hospital Study looked primarily at acute, sudden injuries incurred during a particular run, not slowly developing overuse injuries.) Dr. Roberts says he hopes soon to contact past Twin Cities Marathon youth finishers to ask about the state of their knees and other vulnerable body parts today. He expects to find them all in enviable health, he said, but that’s a guess. “We need more science” about youth running, he said.

Lara McKenzie, principal investigator of the Nationwide Children’s Hospital Study, agrees. “We need to understand more about why and how kids become injured” while running, she said, “so that we can make recommendations about how to lessen the chances that any child will be hurt.”

In the meantime, though, a few obvious fixes suggest themselves: Make sure your young children’s shoes are tied and the places where they run are clear of toys, broken pavement, lunch boxes and other easily sprawled-over obstacles. Adolescents should increase mileage gradually. And, obviously, just because children apparently can run long distances safely does not mean that they should. “It has to be a self-directed choice,” Dr. Roberts said. “The child should want to run with you, not you wanting to run with your child.” If, with these caveats, your son or daughter does wish to train with you, “there doesn’t seem to be a valid reason to say no,” Dr. Roberts concluded, apart, of course, from the humbling certainty that at some point you will be unable to keep up.