YOU REALLY DIDN'T OTTER - BUT YOU GOTTER 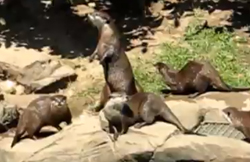 Otters may not be the first creatures that come to mind when you think of a group chase scene, but that's exactly what happened when this bevy caught sight of a little yellow butterfly in their enclosure (fun fact: a group of otters is called a romp or a bevy).  The butterfly doesn't seem to mind the game too much, and escaped unharmed, so the chase was all in good fun. And come on, that's probably the most adorable attack you could ask for.

The Running Club goes for its usual romp tomorrow night at 5:30pm from the UNB Gym - usually for a run of 10 km - for those training for upcoming marathons the romp is a little longer - growing in length as the marathon draws closer.

But back to our otters and their little romp.   Celtic spirituality is about even appreciating the 'fluff' of life.    For in the romp of the otters, as they chase the butterfly, it reminds us that we are to enjoy life.

However, we are also cautioned to be sure we chase after the right things.   Recalling some of the chases of an earlier time in life, it was like chasing after the wind.     But somewhere along the way, actually it was the experience of running through the seasons when first arriving in Canada that caused me to reflect on the beauty of creation.

I remember one day - early morning in January - when my early morning 10 milers took me and my running buddy, a 125 pound yellow labrador "Ben"   - big Ben to his friends - through the UNB woodlot.   It had snowed a fair bit during the night and the trees in the woodlot were just simply magnificent.   The branches were laden with the heavy wet snow and it looked indeed like some wonderful magical winterland.

Ben and my footprints were the first marks in the fresh snow and it was still kind of snowing, but large parts of the sky had given way to a bright blue as the sun tried valiantly to take over the day from the possession of the storm the night before.    Thankfully the sun won.

We came to a spot in the woodlot where a couple of guys had been clear cutting - but the old fashioned way - using a horse to pull out the logs to the spot where they could be picked up and taken to the mill.   I remember one morning the man who unhooked the horse from its load of wood and sent it back off by itself to get another load, had an icicle hanging from his nose about 3 inches long.   I kid you not.   It was an amazing sight to watch the horse walk to and fro with its load of wood, but more amazing as to what was attached to this man's nose which eventually he knocked of.   It wasn't otters that day, bit it rhymns with otters. But that's another story.    Where was I?  Oh, yes ...

.... We came to this clearing in the woodlot where branches weer strewn all around, cut as they were from the trees that had been recently felled.   As we came upon the clearing, I stopped in my tracks to simply marvel at the silent and majestic beauty of the scene that lay before me.   It was breathtaking in its beauty.

My response was to think that somewhere there had to be a Creator of such marvelous beauty and solitude.   A Divine Artist if you will.  Sudedenly, deer started jumping everywhere and Ben was so excited he didn't know which direction to turn first.  Too many targets and too many decisions.  He came to me for assurance.   I got such a scare that I had to sit down for a moment - the old legs were just ashaking.  I guessed there was twenty or more deer yarding there probably feeding on the newly cut branches that formed the wonderful designs that filled my mind for a all to brief moment with the wonder and beauty of nature.

In all Creation, and in all people,the Light of God is to be glimpsed ... in the rising sun of an early morning run in the woods, with trees so heavy it looks like they are bowing in prayerful thanksgiving to the Lord of the universe.    ( The Bible tells us that God sees us as "wonderful works of art" which is a far cry from what many preachers are to willing to call us)

The Light of God is to be glimpsed in the moon at night, just as it was last night, when outside with my 16 year old dog Lady, now a very senior citizen of the dog world, ( Lady reminds me of the flying dutchman - she justs wants to sleep all the time ).  The bright moon and the shining stars gave the windy night a special glow, a special feel as only the moon and stars can in a New Brunswick mid-winter cold night.

And the Light of God is to be found in every person.    As I write my thoughts go to the four officers who risked their lives to save another human being from drowning in the frigid waters of the frozen Saint John River.   What a story.  heroes everyone - including the 'team' that surrounded them.

In the Church we are celebrating the season of Epiphany - which means that after the Christmas Season of celebrating the birth of the Christ Child in Bethlehem -Immanuel - God with us -  the Epiphany spotlight now shines on Christ the Teacher who calls men and women to be his hands, his feet, his lips, his eyes, his ears.  Jesus Christ is the Light of the world.     The Epiphany Season invites us to cultivate a spirituality that sees God's hand in the whole of life - calling us to offer our thanks and praise and service.

Epiphany blessings and peace to you! 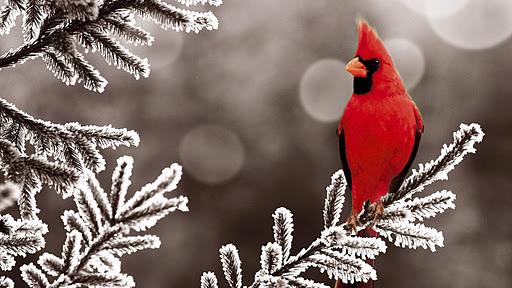